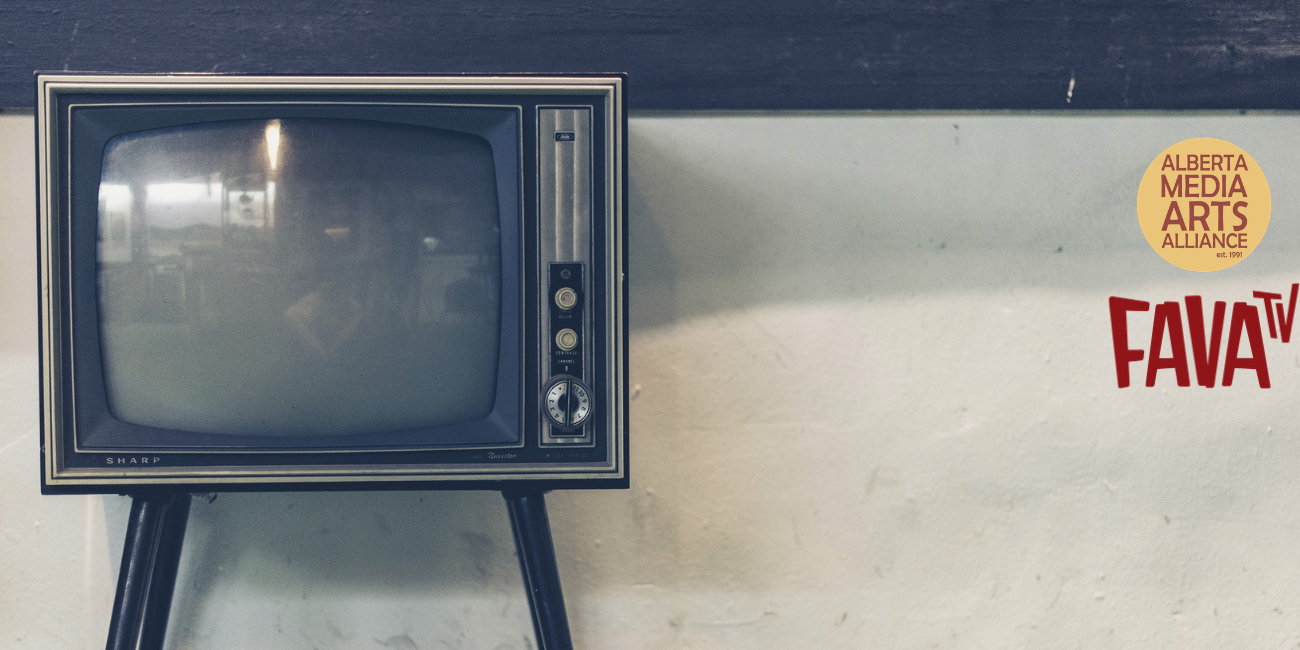 For Fava TV Fourfold: A Thematic Curatorial, Dr. Kristen Hutchinson will be mining the archives of FAVA TV to create four collections and curatorial essays based on specific themes. The first collection of ten media artworks is an exploration of place. Three more thematic collections will follow summer 2020.

This project was funded in part by The Alberta Media Artists Alliance Society of Alberta (AMAAS).

In these pandemic times, I think we could all use a little more joy in our lives, some time and space to re-experience the pleasures of the small, medium, and large things that make our lives happier. For your viewing delight, I have chosen ten media art works for this edition of FAVA TV Fourfold: A Thematic Curatorial that explore joy in all its wonderful permutations. These films and videos portray the joys of having what was lost come back to you, watching a vampire trying to enjoy a night out, the silliness of an obstacle race, a dog, a cat, a rocket, cooking, plants, putting up Christmas lights, and walking through fields with a paramour. Give yourself some time to sit back, turn off all your daily distractions, and experience a little joy from FAVA TV.

Combining animation and live action, Change by Tom Robinson tells the story of a change purse with animated, moveable arms that goes on a little adventure. It first gets picked up and taken out from its owner in a laundry mat by a young girl. The change purse is left hanging on a trash can where it hitches a ride on a bike and ends up in a man’s laundry bag to be brought back full circle into the laundry mat from whence it came. As it jumps out of the laundry bag to return to its owner, the man and woman meet. There seems to be a spark between them as she gives him some change to do his laundry. If you have ever lost your wallet and had it returned to you, sometimes through very circuitous paths, you know the joy and relief of being helped by strangers. And what is more joyful than that special jolt you feel the first time you meet a potential new partner?

Shred Kelly’s music video for their song New Black, directed by Christina Ienna, comically portrays the joys of teamwork. The five members of the alternative folk-rock band train hard to get ready to go against a conniving group of cheaters called “The Cheatahs”. They jump rope while solving a Rubik’s cube, hula hoop, and eat lots of fruit and veggies. They then compete in a series of competitive events such as a tug of war, an obstacle course, and an egg-and-spoon race. Despite the devious antics of The Cheatahs, including gluing eggs to spoons, Shred Kelly wins the competition in the end. If you need a silly and joyful romp set to upbeat music, then check out this video. It certainly made me nostalgic for the pre-pandemic era, which I call “the before time”, when we could run and play and scream and laugh together without wearing masks and worrying about transmission rates.

Tropical Days by John Osbourne takes us on a trippy voyage into the detailed surfaces of tropical plants. This experimental video shows how joy can be found in spending time looking at things closely. Photographs of tropical plants taken by Osbourne on a trip to Mexico are transformed by colourful animated effects and paired with a soundtrack from a live performance by sound artist Shawn Pinchbeck. The plants become beautifully mesmerising and alien with this treatment, leading the viewer into a meditative space that is both calming and joyful. The soundtrack, in Osbourne’s words, creates “the mood of a tropical storm” and this idea is amplified by the animated raindrops that fall on the plants.

Exploring the world through the eyes of a dog is a joyous experience created by Ron Checora in oh Trina. Border collie Trina, owned by FAVA member Dave Morgan, gets taken on a tour of the paths, riverbanks, and bridges of Edmonton’s river valley. She happily gambols on a beautiful summer day through the forest, plays with other dogs, drinks from puddles, sniffs, and jumps, her tongue hanging out in pure elation. I have had the pleasure of spending time with Trina and she is an exceptionally sweet and special dog. Checora takes us into Trina’s world by giving us a glimpse into the joys that Trina experiences.

Lindsay and Stephen Robinson’s How to Learn Anything web series captures “the process of learning unconventional skills, with crazy timelines and even crazier challenges.” How to Learn Anything: Can I Train a Cat to Launch a Rocket? is all about the joys of discovery, experimentation, and a very cute cat. Stephen wants to build a rocket from scratch and teach a cat to launch it by pressing a button when he says “engage”. The one-year cat, who is described as “the best cat in the world, was borrowed from their writer’s brother and the process of training begins. Can I Train a Cat to Launch a Rocket? shows the wonderful geekery of model rocket builders and the gratification found in learning and teaching new skills. You can’t help but smile at the ecstatic joy on Stephen’s face when the cat finally touches the launch button for the first time. I won’t spoil it by telling you whether the cat successfully launches the rocket. Watch it and see for yourself!

Set in 1949, the narrative film This Wind by Dylan Rhys Howard portrays a couple holding hands, snuggling, talking, and exploring a prairie landscape. Even though the woman discovers that her beloved is married, she kisses him anyway. Ah the bittersweet joy of being in love with someone who maybe we shouldn’t be. The film shows how wonder and happiness can be found in stolen moments. However, finding and experiencing joy can also a complex endeavour since one might hurting others in the process. The film’s cinematography is gorgeous and captivating. The sound of the wind moving through the fields is beautifully calming. Too bad polyamory wasn’t as much of a thing in the 1940s as it is today!

Vicki Van Chau’s one-minute silent film Flour & Water demonstrates the joy of simple activities as a chef combines water and flour to make a bunch of long white noodles. The movement of his hands as he mixes and kneads the ingredients and pulls and twists them into perfectly uniform noodles is especially captivating. Like Tropical Days, the film reminds us to take time to really look at things closely in order to see their beauty. Part of the 2019 Gotta Minute Film Festival, Flour & Water feels particularly pleasing in this pandemic moment as many of us have turned, or returned, to the enjoyments of baking and cooking.

All in a day by Kathleen Fraser, another silent, one-minute film from the 2019 Gotta Minute Film Festival, draws our attention to the joys of the natural world. Using a time-lapse technique, Fraser captures the transformation of a peony flower as it opens during the day, closes for the night, and reopens the next day. The shifting light and the movement of the petals of the flower are particularly hypnotic to watch. We even get to see some bees come to visit. Reconnecting with the beautiful aspects of nature feels especially important these days and gardening has become just as popular as baking during this pandemic. Perhaps gardening can provide us with a way to recapture our joy of nature at a moment when it can feel like nature has turned against us.

In From A Light Within: A Christmas Story, a short documentary by Beth Wishart MacKenzie, Bill Thompson doesn’t let the fact that he is blind get in the way of putting up Christmas lights outside his house. He talks about his Christmas traditions and the family history of the decorations as he gets ready for a visit from his brother, who is terminally ill. He wants to put up as many lights as possible because he knows his brother will enjoy them. He speaks of appreciating spending time together with his family. The film makes me think of the importance, and the joy, of overcoming adversity by just keeping on going. This is a lesson we can turn to as we struggle to adapt to the many challenges in this still COVID infested world.

Lastly, if you need a chuckle, watch the music video for The Wet Secrets’ song Nightlife. Written and directed by band member Trevor Anderson, the video brings back the Second City Television (SCTV) character Count Floyd (played by Joe Flaherty) to hilarious effect. Count Floyd was the host of the Monster Chiller Horror Theatre segments on the Canadian SCTV sketch comedy show that ran from 1976 until 1984. There are lots of great nods to this iconic comedic character in the music video such as his signature lunging of objects towards the camera to make them look 3D and howling like a werewolf. The video shows the potential illusiveness of finding joy. Count Floyd’s unsuccessful attempts to have some fun are wonderfully funny. He seems out of step with everything that anyone else is enjoying. He eats some popcorn and watches a Twilight rip-off film, he goes to a nightclub, and even tries to suck some blood from a young man, but nothing brings him joy. Flaherty said about making the video: “I liked the idea; I liked the song. I thought, ‘This could be fun, so I’ll do it.’ It seemed like a good gig for Count Floyd, to resurrect the old vampire.” Count Floyd does end up laughing at himself, a good reminder to find the funny in life and not take ourselves too seriously.

I hope these gems can bring a little light, amusement, relaxation, and joy into your day. Watching these films and videos certainly uplifted me, even if just for a little while. Take care, stay safe, and public service announcement: remember to help reduce the spread of COVID by keeping six feet from other people and wearing a mask in indoor public spaces.

Dr. Kristen Hutchinson is an art historian, visual artist, curator, writer, editor, and art consultant. She received her PhD in the History of Art from University College London in 2007. In addition to teaching as a contract lecturer in the departments of Art and Design, and Women’s and Gender Studies at the University of Alberta, Kristen offers independent seminars about art, television, film, feminism, and popular culture in her living room and online. She is the editor-in-chief of Luma Quarterly, an online, open access journal about film and media art, with a focus of Western Canada.

Kristen is also the author of Prairie Tales: A History, populated with interviews from Alberta’s media arts communities, the book tells the seventeen-year story of sharing short films and videos made by Albertan artists. She is currently writing a creative non-fiction book about supernatural creatures in contemporary art, film, and television. Visit her website for more information.

To find out more about media art in Alberta, read Prairie Tales: A History.